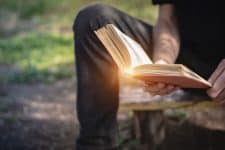 Sin is the greatest tragedy imaginable. Yet God was not willing to leave us in our lost condition. When Adam and Eve sinned, God already had a plan to rescue them and their descendants. Designed before the world began (Ephesians 1:3,4; 3:10,11) and open to any who would be willing to come back to Him, this plan was based on God’s love rather than any obligation on His part. It would be God’s grace that would open the door to reconciliation and eternal salvation.

Sin “disordered” God’s creation, to say the least. The harmony of the creation depended on the perfect relationship of every part to the will of its Creator, and when the human race rejected that will, choosing disobedience instead, the result was strife, suffering, and death. The ripple effect of sin goes far beyond what little we know of it. We see only the edges of the true damage that sin has done, but one thing should be obvious: the only way the consequences of sin can be dealt with is to deal with the root of the problem. If it was the breaking of the Creator-creature relationship that disrupted everything, that relationship is what must be brought back to normal. And to put it simply, this is what the gospel of Jesus Christ is about: the restoration of the Creator-creature relationship.

But to repeat the point we began with, it was by God’s grace that He provided a way for this relationship to be restored. Having alienated ourselves from God, we could not have repaired the breach. And God, who was capable of repairing it, did not have to do so. He could have remained perfectly just and leave us to the consequences of our wrongdoing. But He chose, in love and compassion, to reach across the chasm and offer us salvation. He did this by giving His Son as a sacrifice that would pay the penalty for our sins, thereby making it possible for Him to remain “just” and still “justify” us (Romans 3:24–26). And it is in the gospel (“good news” or “glad tidings”) of Jesus Christ that God’s offer of pardon is made known to mankind, an offer that is available to anyone in the world.

The universal offer of the gospel does not mean that its forgiveness is provided automatically or unconditionally. It was God’s prerogative to set the terms of our reconciliation to Him, and that is what He has done. In the New Testament, we find that in order to receive the gift of God’s grace there are some things required of us — both initially, when we first respond to the gospel (Acts 2:37,38), and also afterwards, as we live our lives in Christ (Titus 2:11–14).

To say that we should be thankful for God’s grace is a considerable understatement. The rest of our lives would be too little time to show adequate appreciation. Nevertheless, it is by our actions — our actual response to the gospel — that we show our gratitude. Our feelings and good intentions, although important, are not enough. The real test of our appreciation is whether we’ve been willing to return to a position of obedience to God, the lack of which was the thing that got us into trouble in the first place.

If we have accepted the conditions upon which God initially forgives our sins in Christ, we live the rest of our lives in continued obedience to the gospel. And one way we can describe the Christian’s life is to say that it is a response, moment by moment, to the grace of God. No matter what happens, the Christian can always ask himself: “In this situation, what would be the best way for me to show appreciation for God’s goodness? What do the Scriptures say?”

And won’t that be the true joy of our perfection in heaven? Having obeyed the gospel and submitted to God’s (sometimes painful) renovation of our character, in eternity a perfect relationship with God will have been restored to us — and we will respond to His goodness completely and perfectly forevermore.